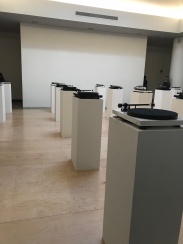 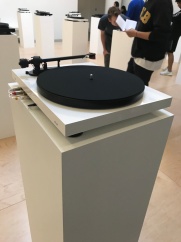 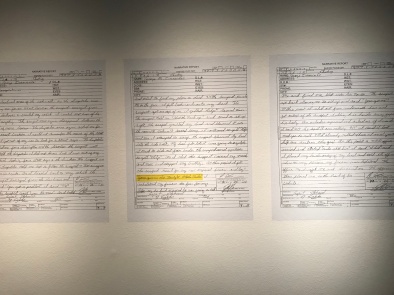 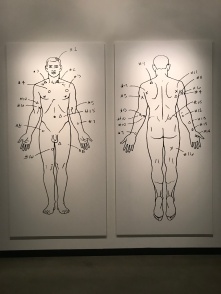 Current Status of the Exhibit: Paused

This week for Art 110, our class went to view Lauren Woods’ art exhibit in the University Art Museum entitled American Monument. The exhibit described a powerful topic but was in a very interesting state: The exhibit is on pause.

And that pause, is what has the entire university in a state of controversy since the exhibit’s original opening date has come and passed without so much as a single change.

Lauren Woods put her exhibit on pause after the university’s recent firing of the UAM Director Kimberli Meyer. Meyer and Woods had been collaborating on the piece for two years. Lauren did not feel it right to put the exhibit up to be viewed without having Kimberli with her. Lauren Woods and the University have yet to meet a compromise on the state of the exhibit, so it has remained on pause, and might remain on pause till its term in the museum is up in December.

Now many have questioned the quick termination of Kimberli Meyer, whether it was due to the controversial topic of the exhibit, but nothing is known for certain. In fact, Kimberli herself has said that she herself was not even told about why she was being fired, just told that she no longer worked at the university and that was that.

With so much secrecy from the university, and few pieces from the exhibit left to look at, walking through the exhibit felt like I was looking at something that was meant to be great, but held less weight than it was intended to.

Each and every person on this list was killed unfairly. And Lauren Woods had intended to show this through the audio of their cases, through their case documents, through the images, and in a diagram showing the entry and exit points of the bullets that have killed these poor people when they never expected it, and when they certainly did not deserve it.

Lauren had even brought in tables that emulate the exact distances that a black individual was shot and killed by a white police officer. In Lauren’s own words,

” The Longest table is 21 feet long, and refers to “‘The 21-Foot Rule,” a guideline indicating that a police officer is justified in shooting a person holding an “edged weapon” if that person is 21 feet away or closer. The “rule,” comes from an article written and published in Swat Magazine in 1983 by Lt. John Tueller, a fire arms instructor for the Salt Lake City Police Department, and quickly spread throughout the law enforcement community. This informal doctrine is often cited in officers’ defense in use-of-force incidents, yet has been criticized for not being based on scientific fact.

The middle table is 15 feet long, which is the distance at which Laquan McDonald, 12 years old, was shot in the back, in Chicago, as he was walking away. McDonald was holding a small 3-inch knife that in a folded position when he was murdered. There was no lunge or charge from the victim, who was experiencing a mental break.

The shortest table is 5 feet long, which is the estimated distance (5-8 feet) at which Margaret Mitchell, a mentally ill homeless woman in her 70s, was shot while holding a screw driver in downtown LA. As in the McDonald shooting, there was no lunge or charge from the victim, who was experiencing a mental break.” – Lauren Woods

The importance of these works cannot truly be expressed in words. The ability to visually look through the case documents, listen to the cases’ audio, and read the testimonies from witnesses and the police officers themselves is something that helps emphasize how important the discussion of police brutality is, and how often innocent people’s lives are cut short because of prejudices based on skin color.

Yet you would never know all this by just looking at the remnants of Lauren Woods’ exhibit. You would never hear the testimonies, read the documents from the court trials, you would not know that those tables represent how close those victims were to the officers that killed them. All you would see is an all white room with 25 black record players, silent pieces of a discussion that needs to be had, but can’t because the exhibit is on pause.

The silence of the exhibit feels as if the exhibit itself is the silence that cases involving police brutality against black people receive every day as they go unnoticed, ignored, and overlooked.

When our entire class was asked if any of us have been to the University Art Museum before, only two people raised their hands. Two. Out of a class of about 124. No one even knew much of anything about the exhibit or what it even is about. Honestly, the lack of understanding and the fact that we had no clue about such a relevant and powerful exhibit makes me sad.

What makes me even more sad, however, is the fact that we did not have the chance to witness the full capability of an exhibit that openly expresses something so horrible that happens to black people every day. Something that often goes ignored that Lauren Woods was going to force people to look at. Force people to acknowledge. Force people to talk about. That is, until she put the exhibit on pause.

I understand why Lauren put the exhibit on pause. An artist’s wishes should always be taken into consideration, and Lauren does not wish to carry on with her exhibit if the person who she worked on the entire exhibit with has been fired from the very university Lauren is supposed to show her exhibit in. It makes sense, in fact, I can say her choice is justified.

However, the fact that no one at the university has the opportunity to even see the exhibit the way it was meant to be presented makes me, and a lot of people question why it is still installed in the first place. Either way, the university and Lauren Woods will have to make a decision because the exhibit will have to be uninstalled in December either way. But until that time comes, it remains a ghost of what it could have been. I just am not sure if its worth it to maintain. Perhaps, by the time this post has been published, a change will have been made either way. Only time will tell. I for one, am looking forward to the final decision regardless.

That’s all for this post everyone. The topic of Lauren’s exhibit has been very controversial across the campus, and weighs heavy on a lot of minds and hearts. I hope it makes you think about what the impact of exhibits that are on pause truly is, and what recent decisions of the university means for the art museum and future directors of the museum overall. What does secrecy from the university change about art? How does it effect how much we are able to see? Just a few questions to think about.

As always, I hope you all have a fantastic week, and if you feel like it, make some art. You never know what impact you could have.

Thank you for reading.